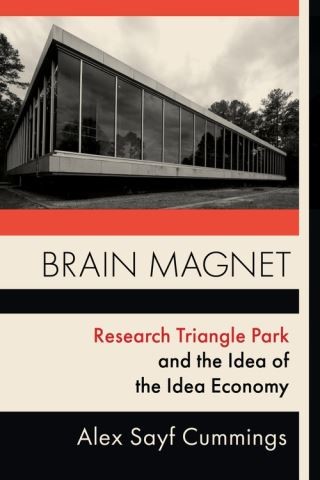 Research Triangle Park and the Idea of the Idea Economy

Beginning in the 1950s, a group of academics, businesspeople, and politicians set out on an ambitious project to remake North Carolina’s low-wage economy. They pitched the universities of Raleigh, Durham, and Chapel Hill as the kernel of a tech hub, Research Triangle Park, which would lure a new class of highly educated workers. In the process, they created a blueprint for what would become known as the knowledge economy: a future built on intellectual labor and the production of intellectual property.

In Brain Magnet, Alex Sayf Cummings reveals the significance of Research Triangle Park to the emergence of the high-tech economy in a postindustrial United States. She analyzes the use of ideas of culture and creativity to fuel economic development, how workers experienced life in the Triangle, and the role of the federal government in bringing the modern technology industry into being. As Raleigh, Durham, and Chapel Hill were transformed by high-tech development, the old South gave way to a distinctly new one, which welded the intellectual power of universities to a vision of the suburban good life. Cummings pinpoints how the story of the Research Triangle sheds new light on the origins of today’s urban landscape, in which innovation, as exemplified by the tech industry, is lauded as the engine of economic growth against a backdrop of gentrification and inequality. Placing the knowledge economy in a broader cultural and intellectual context, Brain Magnet offers vital insight into how tech-driven development occurs and the people and places left in its wake.